The MK23. It's such an iconic replica in the Airsoft community today, known as a powerhouse of efficiency, accuracy and reliability. In the last two years alone (in to its 10+ year reign as a monarch), the MK23 NBB has exploded in popularity, innovation and growth; so much so that it's an incredibly hard argument to win to say that it is not the most versatile platform currently on the Airsoft market.

With that status confirmation, is it any wonder that we have started to see the pistol claim more and more recognition in the Airsoft community? With more and more community figureheads and influencers appearing among us and adopting successful products and relaunching versions of them under their own banners; would it be a complete surprise to the community if we were to see this sort of adoption occur with our very own MK23? Or would we respond to these banner bearers by asking "Why did you take so long?"

Well, whether we agree with adoption or not, there's going to be a new parent on the block. His name is Novritsch.

If you don't know the name, you've got some homework to do, but here's a quick summary: "...YouTuber who is known for his NOVRITSCH channel. He has gained popularity there for his videos of scripted scenarios alongside friends that feature his skill as an airsoft sniper. Before fame, he served as a scout sniper in the Austrian military. He began his YouTube channel on February 7, 2012 and posted his first video there on October 3, 2012. He has garnered more than 3.5 million subscribers to his YouTube channel. One of his most popular videos, "Airsoft Sniper Gameplay - Scope Cam - Urban Sniper 2," has earned more than 7 million total views." - Source

You can find out more about him here:

All caught up? Great.

Now that you know about Novritsch, and his exploits in the Airsoft community and as a player, you'll know that he has successfully launched a range of products (new and existing) under his name (most notably the SSG24 bolt action rifle and the recent SSP1 gas blowback pistol).

Late last year, we saw an appearance of a familiar shaped pistol clad in a disruptive prototyping pattern in one of Sniperbuddy Fabi's gameplay videos (this one), that appearance rocked the boat a little, and got a discussion going in several community groups. Here's a capture from the vid of Novritsch showing it off:

That's right, its a MK23. Still in the boat? Good, lets continue. With a disruptive looking MK23 teased and no announcement or commentary at the time from Novritsch or Fabi, community groups were left to guess and speculate just what exactly the appearance of this MK23 meant for us as MK23 owners and airsofters - was it simply an clever use of the disruption pattern for added concealment at a snow covered field or were we seeing the first glimpse of a new Novritsch prototype?

To answer that question, let's jump ahead to the 31st of January 2019, when this video appeared; this time on Novritsch's YouTube:

We'll save you watching the whole video right now to find out; it wasn't fancy snow camo.

The video continues from Fabi's earlier snow gameplay video, this time from Novritch's perspective. In it, we see clearer shots of the new MK23 prototype and several visual clues as to what we might expect from the final products. So be before we go in to what we think about the arrival this new prototype to the market, lets get stuck in to what we've learned about the prototype so far.

Here's a quick roundup of facts and features that we have gathered from the videos and from posts in community groups on Facebook:

This capture from the video provides a pretty clean look at some of these features.

In the image, we clearly see a rear mounted optic that is positioned in front of the rear iron-sight, confirming the presence of a slide mounted optic rail (and not a clip on). We also see a weapon-light, confirming the presence of front underside rail. Lastly, we see a reduced length stock style suppressor. We'll have to see how these rails are attached and whether the suppressor will include any internal sound reduction improvements.

So what can we divulge from the gameplay videos? There are couple of things, but first, familiarize yourself with the video captures below. It's important to reiterate at this point that Novritsch has confirmed in a post that he did use both a Tokyo Marui and a Clone during testing, as well as a full range of parts throughout to test compatibility - which is why what we may be seeing from the video may not be representative of the final product and we are still very much speculating at this point.

OK. Let's take a look at some more "confirmation" points.

First up, we can confirm the magazine shown during the mag change scene is a clone magazine. Whether that just happens to be what was used at the time or what will be provided with the replica remains to be seen. Here's how we know (using "CSI mil-grade" super science):

Here are some examples of clone magazines to compare against. 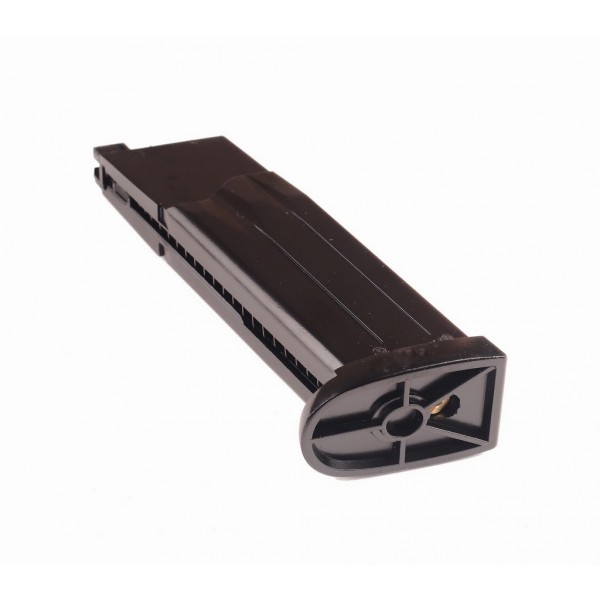 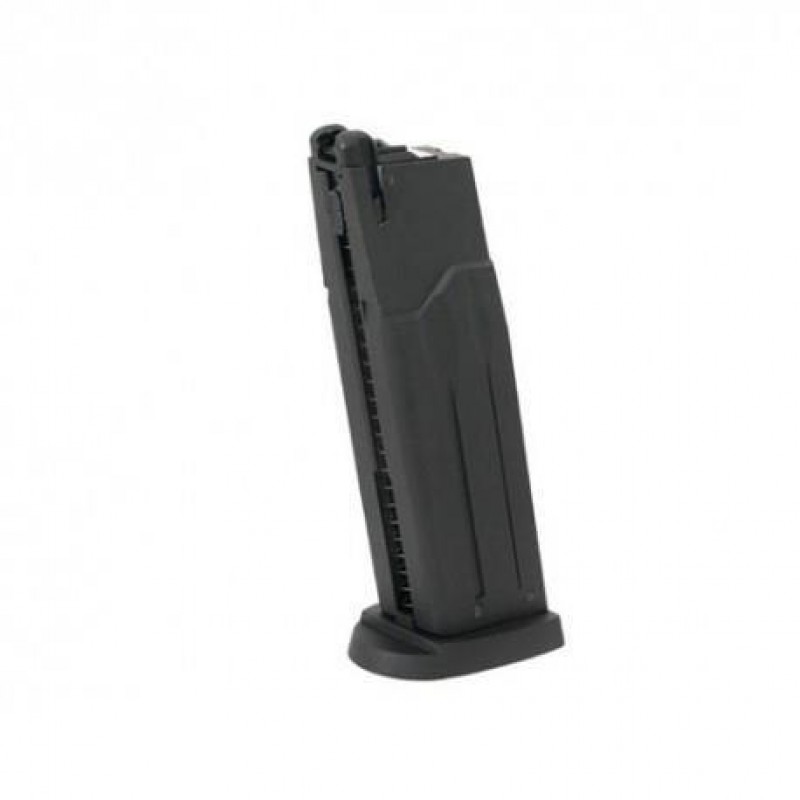 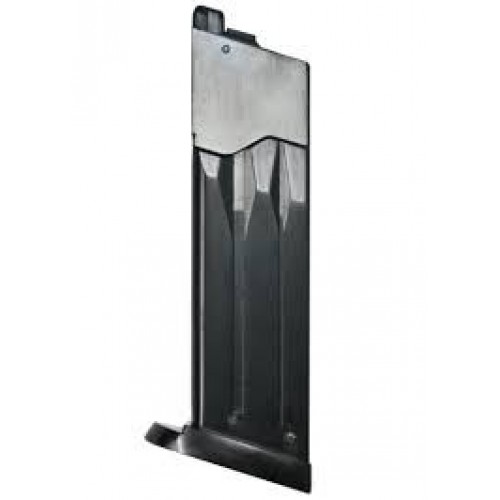 For now, it's looking like we'll see a Clone magazine, and sadly, not even the preferred version with the follower slot which is more faithful to the TM design (smoother feed lips and angled follower head).

Alright, let's move on to the next curiosity under the effects of our "high tech image enhancing" techniques...

As we listed earlier, we expect that the pistol will feature a TDC, it's essential enough these days it's basically considered part of the MK23. We expect it, because we can see it throughout the video. What you may or may not have noticed, is that, at least on the version of the pistol used in the video, it's naturally equipped with a Hadron Airsoft Designs V2 or higher TDC. Check it out.

The reference point to look for here on the TDC is beneath the disruption pattern, the two peaks of the HAD logo.

Here are some comparisons. 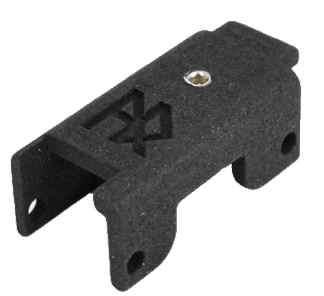 Since the video has gone live, Novritsch has personally addressed various points and comments both on the video and in community groups, such as the MK23 Owners group. We expect he'll continue interact with the community (and his potential future customers) over the period leading to the release of the pistol, to address concerns, suggestions and general feedback which will help lead to an improved development process.

We've talked about what we knew about the upcoming Novritsch prototype and looked at some points of interest on the pistol, but there is a much larger, more important picture in the background of this release. The introduction of this pistol is potentially the most explosive thing to happen to the MK23 community, ever. Regardless of the quality of the product that Novritsch delivers to our community, Novrtisch has a die hard following of players that are "no questions asked" buyers (not to be confused with uninformed buyers, they are just loyal and trust the brand) - almost as potent as our very own MK23 cult. The Novritsch company marketing is lethally strong and effective, with an immediate market group of 3,500,00 subscribers on YouTube alone that could potentially buy his new pistol, the guaranteed chance for new MK23 owners (his version or other) to appear in the community is massive, as in, many thousands of them! Whilst those are good numbers to think about if you're an accountant, we're incredibly excited about the the unavoidable, inescapable growth that will happen to us as a community of MK23 owners. This sort of growth will without a doubt inspire and motivate innovation and progression for the platform as new members arrive in the community and existing innovators provide for the new (and old) owners. The positive opportunity for change that we can see from this release is very humbling. Let's hope we see a product from Novritsch that we can accept in to the community with open arms. It's going to be an exciting year.

We look forward to trying the final version for ourselves!

You can find out more about Novritsch here:

Be sure to join the MK23 Owners Group and keep up to date with the latest discussion on this product and topic. Simply click the logo in the footer of our page.

{"items":["5f6c6927410d1c0017843c3c"],"styles":{"galleryType":"Strips","groupSize":1,"showArrows":true,"cubeImages":true,"cubeType":"fill","cubeRatio":"100%/100%","isVertical":false,"gallerySize":659,"collageDensity":0.8,"groupTypes":"1","oneRow":true,"imageMargin":0,"galleryMargin":0,"floatingImages":0,"chooseBestGroup":true,"smartCrop":false,"hasThumbnails":false,"enableScroll":true,"isGrid":false,"isSlider":false,"isColumns":false,"isSlideshow":true,"cropOnlyFill":false,"fixedColumns":1,"enableInfiniteScroll":true,"isRTL":false,"minItemSize":120,"rotatingGroupTypes":"","rotatingCubeRatio":"","gallerySliderImageRatio":1.7777777777777777,"numberOfImagesPerRow":3,"numberOfImagesPerCol":1,"groupsPerStrip":0,"borderRadius":0,"boxShadow":0,"gridStyle":0,"mobilePanorama":false,"placeGroupsLtr":false,"viewMode":"preview","thumbnailSpacings":4,"galleryThumbnailsAlignment":"bottom","isMasonry":false,"isAutoSlideshow":true,"slideshowLoop":false,"autoSlideshowInterval":3,"useCustomButton":false,"bottomInfoHeight":0,"titlePlacement":"SHOW_ON_HOVER","galleryHorizontalAlign":"center","galleryTextAlign":"center","galleryVerticalAlign":"center","scrollSnap":true,"itemClick":"expand","fullscreen":true,"allowSocial":true,"allowDownload":false,"allowTitle":true,"allowDescription":false,"loveButton":true,"loveCounter":false,"videoPlay":"hover","scrollAnimation":"NO_EFFECT","scrollDirection":1,"overlayAnimation":"FADE_IN","arrowsPosition":0,"arrowsSize":18,"watermarkOpacity":40,"watermarkSize":40,"useWatermark":true,"watermarkDock":{"top":"auto","left":"auto","right":0,"bottom":0,"transform":"translate3d(0,0,0)"},"loadMoreAmount":"all","defaultShowInfoExpand":1,"allowTitleExpand":true,"allowDescriptionExpand":true,"allowLinkExpand":true,"expandInfoPosition":0,"allowFullscreenExpand":true,"fullscreenLoop":false,"galleryAlignExpand":"left","addToCartBorderWidth":1,"addToCartButtonText":"","slideshowInfoSize":160,"playButtonForAutoSlideShow":false,"allowSlideshowCounter":false,"hoveringBehaviour":"NEVER_SHOW","thumbnailSize":120,"magicLayoutSeed":1,"imageHoverAnimation":"NO_EFFECT","calculateTextBoxHeightMode":"AUTOMATIC","calculateTextBoxWidthMode":"PERCENT","textBoxHeight":0,"textBoxWidth":200,"textBoxWidthPercent":50,"textImageSpace":10,"textBoxBorderRadius":0,"textBoxBorderWidth":0,"textsVerticalPadding":0,"textsHorizontalPadding":-30,"titleDescriptionSpace":6,"customButtonText":"","customButtonBorderWidth":1,"customButtonBorderRadius":0,"loadMoreButtonText":"","loadMoreButtonBorderWidth":1,"loadMoreButtonBorderRadius":0,"imageInfoType":"ATTACHED_BACKGROUND","itemBorderWidth":0,"itemBorderRadius":0,"itemEnableShadow":false,"itemShadowBlur":20,"itemShadowDirection":135,"itemShadowSize":10,"imageLoadingMode":"BLUR","expandAnimation":"NO_EFFECT","imageQuality":90,"usmToggle":false,"usm_a":0,"usm_r":0,"usm_t":0,"videoSound":false,"videoSpeed":"1","videoLoop":true,"gallerySizeType":"px","gallerySizePx":659,"galleryLayout":5,"selectedLayout":"5|bottom|1|fill|false|1|true","layoutsVersion":2,"selectedLayoutV2":5,"isSlideshowFont":true,"externalInfoHeight":0,"externalInfoWidth":0},"container":{"width":659,"height":531,"galleryWidth":659,"galleryHeight":370,"scrollBase":0}}
Back to Top
Return to Overview